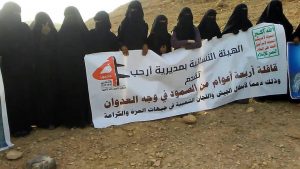 Women rally in Sanaa to launch food convoy to back army

Dozens of women in Arhab district of Sanaa province staged on March 27,2019 a rally to launch food convoy to back the Yemeni army in confronting the Saudi-led coalition.

At the rally, the women marked the fourth anniversary of steadfastness of the Yemeni people against the coalition and its plots that target Yemen.

The participants stressed the importance of continuing the steadfastness and support of the army with fighters for defending the homeland and its sovereignty.

They condemned the continuing horrific massacres carried out by the coalition and its militias against children and women.

مشاركة
السابقWatch: the funeral of a group of martyrs of the Yemeni army,popular committees in Dhamar province in 4-4-2019
التالي Hamdan tribes back army in fronts