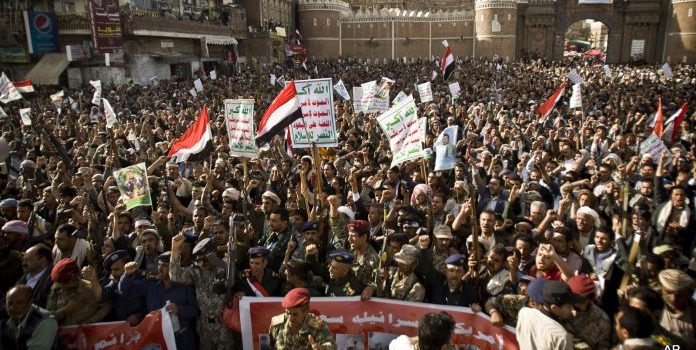 P[rotest rally was organized on July 1 by tribes and sheikhs in al-Jafarih district of Raimah province to condemn the war crimes committed by the Saudi-led aggression on the Yemeni people.

At the rally, the participants stressed on the importance of unifying the internal fronts to confront the aggression.

The protesters affirmed on continuing to back the Yemeni army with fighters and food convoy to defend the country and its sovereignty.

The rally hailed great triumphs made by the army and popular forces against the aggression and its mercenaries.

The tribes also stressed on the importance of the ongoing support to the fronts with fighters and food convoy to fail the aggression’s plots.

The participants called the Yemeni tribes to unite for defending the country and its sovereignty, security and stability.

مشاركة
السابقTribes in Marib continue to back battle fronts
التالي Watch: the funeral of a group of martyrs of the Yemeni army, popular committees in Amran, Mahweet provinces in 8-9-2019