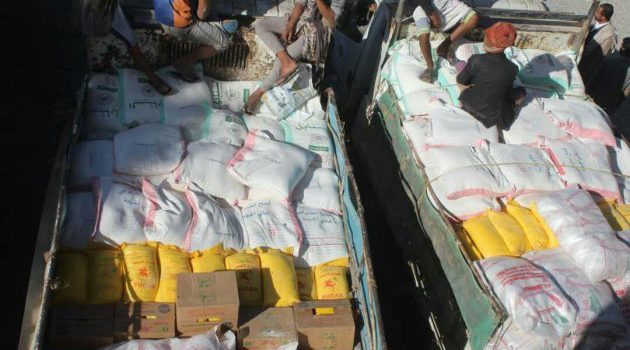 Bonyan Development Foundation distributed on January 14,2019, more than 2,000 food baskets to the most needy families in the city of Hajjah.

During the distribution process, the deputy of the province for planning affairs and civil society organizations praised the role of Bonyan Foundation in alleviating the needy families during the barbaric aggression that destroyed all the country’s capabilities.

The head of the distribution team at Bonyan said during the inauguration process that the distribution of this food aid comes within the framework of the Foundation’s interest in alleviating of the suffering of citizens in the governorate.

He pointed out that this aid will be distributed to poor families, which have not been helped by the organizations and who suffer the mostly because of the continuation of the siege and aggression.

He mentioned that this distribution included many neighborhoods of the city of Hajjah and its suburbs, according to the survey data that poor families and the most needy.

Al-Qawsi explained that the distribution process went through the first two stages, surveying and processing the beneficiaries’ lists and distributing food baskets to them.

He pointed out that the distribution teams have adhered to Banyan’s methodology in preserving the dignity of the beneficiaries by delivering baskets of food to their homes .