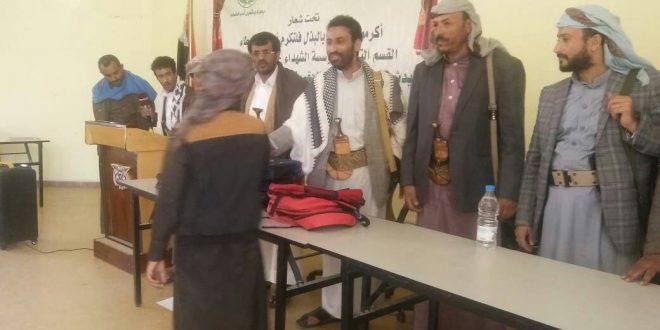 The Martyrs  Foundation for the Welfare and Rehabilitation of the Families of Martyrs _ Marib province  branch , on Monday 1/10/2017, launched the integrated school bag project for the sons of martyrs who attended school for displaced people from the province  in a ceremony which was attended by a large number of parents and children of martyrs

In addition,  a number of speeches from the leadership of the province , whereas  the general observer of the province Mr. / Abu Najib Khalid Jahtar talked about the occasion of Ashura , when the prophert’s Mohammed’s grandson get martyred and lessons learnt from the steadfastness of Imam Hussein, peace be upon him ,in the face of challenges , deviation and misguidance,
And  they appreciated the efforts of the supporters of the families of the martyrs , who have bear their responsibilities in front of  Allah  and their community by  paying attention to the best segments of society, the children and families of the martyrs

A  speech on behalf of the martyrs’ parents was ,furthermore, given Mr.  Mari Al Ameri, addressing the need to pay attention to the families of martyrs and rehabilitation in various fields, especially in the educational aspect to make them have an important  role in society,

One of the martyrs’ sons, Badr Nasser Al-Za’bali, gave a speech on behalf of the sons of the martyrs, in which he emphasized their desire to continue on their parents path and  education, rehabilitation and training in order to face the  aggression and evil forces, Saudi-Led Coalition

The ceremony was marked by a number of paragraphs, whereas  a poem was delivered by the student / Mneh Almashn , which conveyed  the virtue of martyrdom for Allah’s sake and the importance of continuing the path of the great martyrs

At the end of the ceremony. The leadership of the province
distributed school bags to the present and displaced students and martyrs’ present childern

The Foundation , the branch of Marib province , will distribute school bags to all the children of martyrs who attend school through the Foundation’s representatives in the directorates

مشاركة
السابقWatch: the funeral of a group of maertyrs of the Yemeni army,popular committees in a number of Yemeni provinces in 13-3-2020
التالي Coinciding with the Beginning of the New School Year … Al-Mahweet Province Launches the School Bag Project for Children of Martyrs in the Province